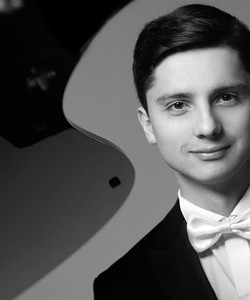 Nikolai Kuznetsov was born in Moscow in the family of musicians. Graduate of the Moscow Gnesin Music College (Tatiana Shklovskaya) and the Moscow State Tchaikovsky Conservatory (prof. Sergei Dorensky)

During studying Nikolai achieved much success. He was chosen a grant-aided student and took part in the concerts organized by Charity Foundation of Vladimir Spivakov, Yury Rozum and Culture Development Fund “Homecoming”. He plays in the best concert halls of the country with symphony and chamber orchestras of Russia and Europe.

He performed on tour in many towns and cities in Russia, Ukraine, Poland, Hungary, Germany, Finland, Sweden, Slovenia,Italy, Colombia. Nikolai was the awardee of public award “The Future of Russia” two times (Moscow, 2008, 2011). In 2008 he got the grant of the Pricewaterhouse Coopers firm.

He receiver the fellowship and participated in the concerts of Roerich Charitable Foundation as well as in the concerts organized by the Moscow Public Culture Fund. He was awarded the grant by “Yamaha Music” and the scholarship of the Government of the Russian Federation.